Everything You Wanted To Know About Raccoons

Raccoons, aka "masked bandits" are revered for their intelligence and ingenuity. They have very nimble and manipulative paws and are very strong. These characteristics provide them with the necessary tools to damage and destroy property in their efforts to survive in urban environments. The following are some more raccoon facts and raccoon information for Vancouver homeowners:

Urban: Although the wild raccoon lives a largely solitary life, the attraction to urban areas can cause them to much more densely populate. A density of 10 - 25 raccoons per square kilometer has been observed. They will build their dens in chimneys, attics, roofs, crawl spaces, under decks and sheds.

Once per year: Male raccoons will attempt to mate with multiple partners each season whereas the female will mate with only one male, avoiding all others afterwards. Mating occurs during the winter months but can continue until June. This prolonged mating season makes it essential for wildlife technicians to detect if there are any babies present during the initial assessment. Offspring are born about 9 weeks after mating. It is not uncommon for mothers to make a last minute den to give birth in which is why urban structures are so attractive.

Litter size: The gestation period is around 63 days. Female raccoons produce litters between 1 and 7 offspring (typically 3 or 4).

Rearing: Newborn raccoons are blind and deaf for their first three weeks but grow quickly. They are cared for exclusively by the female who teaches them how to forage for food and shelter. One of the main threats to young raccoons is predators such as the coyote. Young raccoons will typically stay with their mother through the first winter after which they gradually leave..

Sexual maturity: Female raccoons can begin to breed at one year of age whereas males tend to begin later at the age of two. 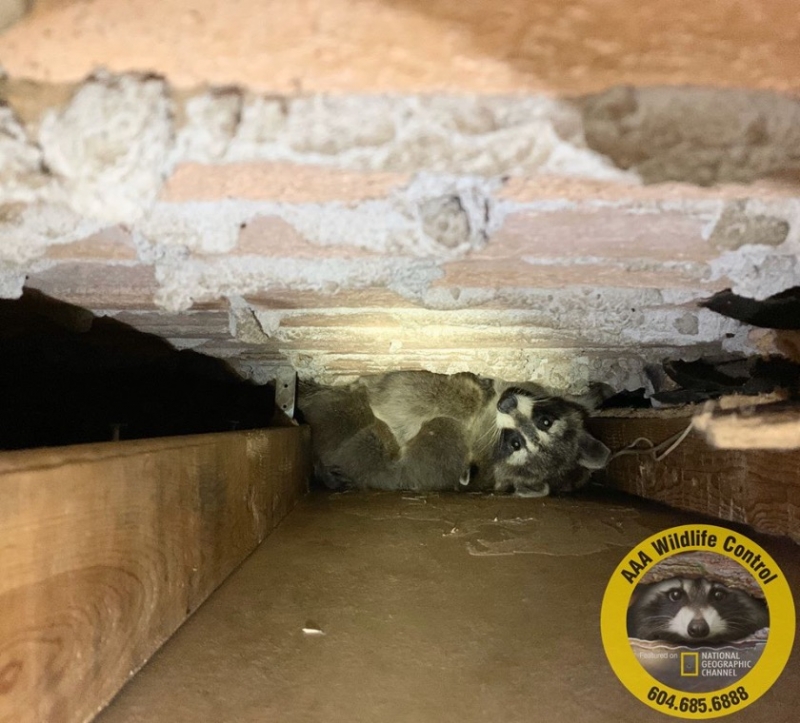 Frequency: Raccoons feeds every day but must forage to locate their food.

Time of day: Raccoons are nocturnal so are most active at night.

Diet: They are omnivores which means they will eat both plants and animals as a primary food source. They prefer veggies, fruits, insects, slugs, snails, fish, frogs, turtles, small animals, eggs and are especially attracted to anything that is left behind in the garbage. They enjoy washing their food prior to eating which is where their latin name comes from - lotor means "one who washes".

Do It Yourself Dangers

For the "do-it-yourselfer", performing wildlife removal and animal proofing can be a dangerous undertaking and best be left to an experienced professional. Over the years we have come across customers who attempted to do-it-themselves, only to sustain serious bodily harm by falling off ladders and roofs. One customer, startled by an aggressive mother raccoon fell through their ceiling onto the staircase below and broke his back.