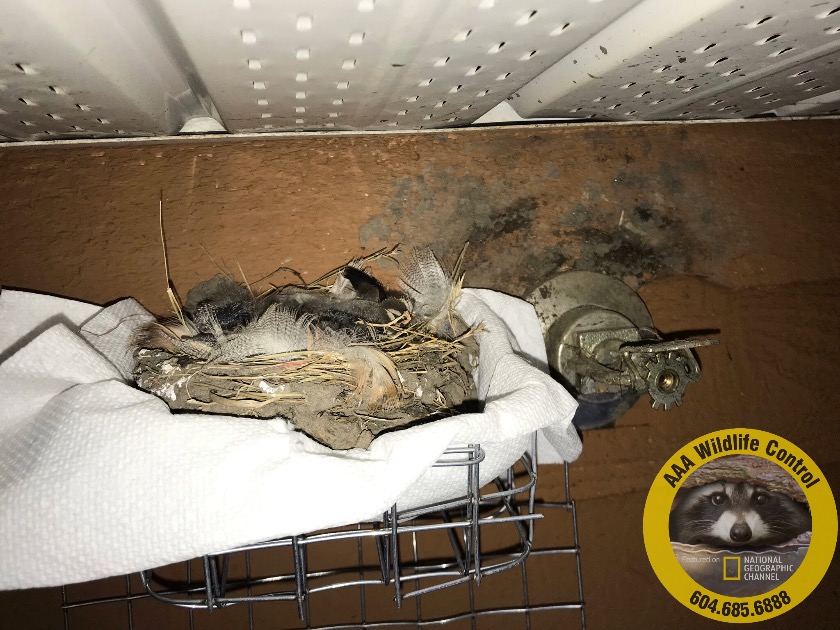 This past Spring, AAA Wildlife Control, was called out to investigate a bird nesting on top of a fire sprinkler head on the back porch of a townhouse complex. Exterior fire sprinklers have been proven to work - wet houses don’t burn! - but with a nest sitting on top, the owner was concerned that the sprinkler had been compromised. Another concern the owner had was that there were feather mites entering his apartment through the window below the nest, which are very common within a bird nest.

AAA Wildlife Control President Randy had to get innovative with this job! Our main goal was to ensure that the mother bird could continue to feed her babies until they were old enough to leave the nest. He proceeded to cut the very well built mud nest off of the top of the sprinkler head and created a temporary holder for the nest. At first, he tried moving the nest about a foot away from the sprinkler head but the mother bird was confused as she couldn’t find her babies. After noticing this wasn’t going to work, he decided to place our temporary holder with the nest directly beside the sprinkler head.

It was a success! Within minutes the mother bird was back feeding her babies. Day after day, Randy had to train this mother bird by moving her nest ever so slightly away from the sprinkler. The reason he had to keep moving the nest further away from the original nesting site was due to the feather mites that were falling down into the window below. As per the homeowners request, he continues to move the nest each day. This process continued on for about 10 days until the nest was far away from the sprinkler head (and no longer on top of the window). He placed a screen box around the sprinkler so that it could still function but will also prevent the mother bird from nesting on top of it next season.

Upon his final visit, he discovered an empty nest! All the baby birds had fledged and had permanently left the nest.