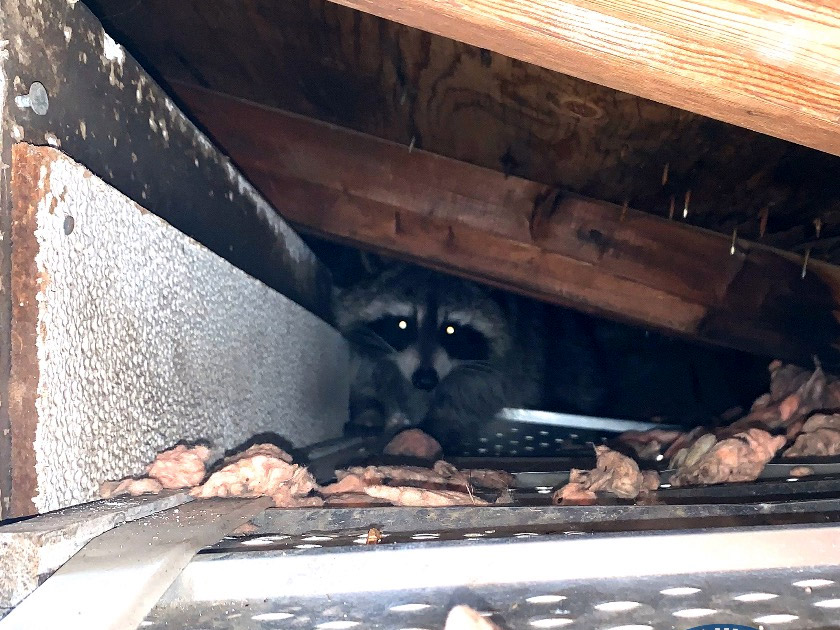 A variety of raccoon problems can occur when they decide to nest within a residential or commercial structure. Some of these raccoon problems are easily remedied while others can have very negative impacts on both the buildings and the people that inhabit them. The following are some common raccoon problems and some warning signs for you to look out for:

Raccoons can cause substantial damage both in gaining access to homes and businesses and with inside damage. Sometimes raccoons will find an existing opening into a building and other times they will rip open a week area creating a lot of damage.

Ripping and tearing: Raccoons have very manipulative paws and are very strong. They are clever enough to open jars, doors, garbage cans and door latches. But worse, they will often rip up soffits, flashings, shingles, siding and aluminum to gain entry to a potential den site.

Insulation: Raccoons enjoy making their dens in warm, dry and quiet spaces. As such, attic insulation can quickly become damaged when trampled on or littered with urine and feces, although it is not common in most cases for raccoons to defecate in their den site (except during baby season). It is also not uncommon for raccoons to displace areas of insulation creating zones where heat is able to escape living spaces. Also, in areas like crawlspaces it is common for raccoons to pull insulation down from the floor space above in attempts to find access leading up out of the crawlspace.

Drywall: Because raccoons are larger animals, if and when they do urinate inside the structure of a building, the amount of urine expelled is a substantial amount of liquid as to severely damage drywall. If this happens a number of times the drywall can become soaked and rotten to a point where the weight of the raccoons is enough to break the drywall and have them come crashing to the room below.

Electrical: Because raccoons are strong and have nimble paws, they can easily expose or tear electrical wires. Obviously, property damage is of concern but even more so is the risk to the lives of the people occupying the building.

Rabies: Raccoon rabies has been of concern since it was first reported in 1999 in Ontario. Since then it was discovered that infected raccoons cannot be distinguished from healthy ones. Rabies is transmitted through saliva often through a bite.

Roundworm: Feces of raccoons is commonly infected with a roundworm known as Baylisascaris. If ingested, they can cause a number of symptoms ranging from nausea to blindness and loss of muscle control and even death. Further, roundworms eggs are very resilient and can be dispersed through water runoff, dirt and building materials.